Through a kaleidoscopic lens of over 100 characters in fifty-seven different scenes, Churchill’s exhilarating play Love and Information explores how our incessant consumption of information and virtual connectivity penetrates and frames our sense of ourselves and our relationships with others.

On the brink of a world war, a mysterious plague starts killing everyone older than 45. A young doctor finds a cure, but what is the cost he is willing to ask the afflicted to pay?

At the Institute for Living, a high end sanatorium for the disturbed daughters of America’s elite, a revolutionary new procedure promises to cure patients of psychiatric and neurological problems; freeing them of the intense negativity and anxiety that plagued them prior.

The Water Hen  is a mystery play about what it means to be human and what human creation is about.  Too much creativity gives way to hilarious parodies of creativity.  At the end of the play, an uprising occurs.  Is this the humanity’s new dawn?

No other theater can consistently suspend reality to create overwhelming and oftentimes-otherworldly atmosphere, usually before the action or dialogue even begins, like Trap Door Theatre. To say that they are the foremost purveyors avant-garde theater in Chicago is to understate this portal to alternate realms. Hidden down a narrow walkway, next to a bar, behind a restaurant, on a side street in Bucktown is a black trap door that opens into the extremes of theatrical imagination. You could drive by it and easily miss this purgatorial paradise of the sublime surreal. Venus Zarris, Gay Chicago Magazine 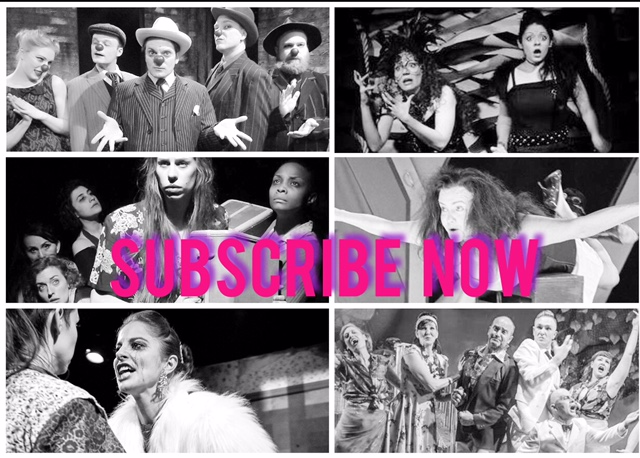 Join us for our 26th Season and become a subscriber!

Super Subscriber pass includes…
* Tickets to 8 Trap Door Shows
* Complimentary glass of beer or wine when you attend
* Exclusive invitation to selected rehearsals!
* Priority Seating for all of the shows

Passes never expire. Passes can be used in any combination anytime for any Trap Door Theatre production. Rentals, tours, or touring companies excluded. Seating is limited — please call ahead to the box office to make advance reservations when using your pass.