Don’t miss a moment of another incredible year with Trap Door Theatre! 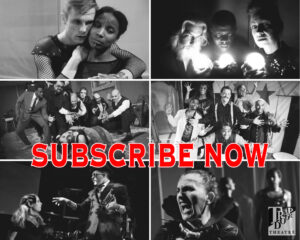 Super Subscriber pass includes… * Tickets to 8 Trap Door Shows *, a complimentary concession when you attend and an * Exclusive invitation to selected rehearsals! * Priority Seating for all of the shows

Passes never expire. Passes can be used in any combination anytime for any Trap Door Theatre production. Rentals, tours, or touring companies excluded. Seating is limited — please call ahead to the box office to make advance reservations when using your pass.

Trap Door Theatre is proud to present its 29th Season!

Lette was never concerned with his looks until his peers tell him he’s the ugliest man in the world. If a pretty face is all he needs to succeed, and plastic surgery is the solution, will he be willing to go under the knife?
Company Manager Michael Mejia returns to direct famous German playwright Marius von Mayenburg’s quick witted comedy on beauty, ambition, and the brutality of capitalism.

Ivona, a woman of few words, is forcibly entangled into the intrigues of a dysfunctional royal court.
Gombrowicz is considered to be one of Poland’s most influential novelists and playwrights, and his works are the forerunners of the theater of the absurd. Originally from Chicago, Jenny Beacraft returns from Spain to direct. Gombrowicz’s work confronts ideas of personal identity, and the failure of existing value systems. Princess Ivona is a meditation on status, cruelty, and desire.

Jeanne et le Feu examines the way in which history is written and rewritten through a modern tale of the making of a martyr.
Following the successes of our productions of How to Explain the History of Communism to Mental Patients, Occidental Express, and many other plays written by Matei Vişniec, Managing Director Nicole Wiesner is excited to direct this newly translated Matei piece for Trap Door Theatre. Trap Door has had the honor to tour multiple Matei Vişniec plays throughout Romania, Hungary, and the Republic of Moldova.

The women of Warsaw tremble with the rumor of a strangler on the prowl. Dorota Masłowska creates an atomic-era Polish landscape, which might even inspire a visit from David Bowie himself.
Trap Door is thrilled to invite Polish director Paweł Świątek to direct our third Dorota Masłowska play after our successful productions of A Couple of Poor Polish Speaking Romanians and No Matter How Hard We Try. Dorota Masłowska is one of Poland’s most exciting and influential young novelists and playwrights.