Bill Gordon is a Performer, Fight Choreographer, and the Technical Director for Trap Door Theatre.  He has been seen on stage performing in Monsieur D’eon is A Woman, Secondhand Time, The Resistible Rise of Arturo Ui and La Bete. He also recently appeared in Trap Door Theatre’s performance of Made in Poland for The International Voices Project. Bill, who is a certified fight choreographer through the Society of American Fight Directors, created the fight choreography for Occidental Express, They, and Secondhand Time. He was also the Assistant Fight Choreographer for The Resistible Rise of Arturo Ui and Monsieur D’eon is a Woman.  He acquired his BA in Theatre from Ohio State, studied at the Moscow Art Theatre, and obtained his MFA in Acting from Northern Illinois University. Other Chicago credits include: Fair Maid of the West, Henry IV and Henry V at Oak Park Festival Theatre, Caligula and Diviners with The Organic Theatre Company, The Binding with Theatre Y, and Messina 3004 with Otherworld Theatre Company. Bill recently appeared on Season 5 Episode 20 of Chicago PD as Trent Taggerty. Bill is represented by Shirley Hamilton. 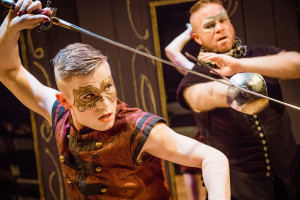 And the hitman extraordinaire is Bill Gordon as Emmanuel Gori, who dons the hat he removes from each corpse. (The killers remove the red nose from each corpse too, in a ritualistic symbol of death. – Nancy Bishop Third Coast Review

If one is in a Seussian frame of mind, Bill Gordon’s Emmanuel Gori acquires the hats of his victims and piles them high on his head over the course of the show like a demented Bartholomew Cubbins in reverse. – Kerry Reid, Chicago Tribune

Besides playing the goofy George III, Gordon also takes a turn as an unusually menacing Louis XVI – Jacob Davis Around the Town