He moved to Chicago in 1993 from Michigan, and discovered the Trap Door in 1997 when he auditioned for Deathwatch, by Jean Genet, and Directed by Original Company member Andrew Wasser. He wasn’t cast, but his audition experience alone, and meeting Artistic Director Beata Pilch kept him coming back. Since then he has performed in several productions with Trap, became a Company Member in 2002, and was very fortunate to be part of the touring company of Trap Door actors who travelled twice to New York City in 2005 for the Fringe Festival and Act French Festival, and also to Romania, Hungary And Poland in the Summers of 2007, 2009, and 2014 with the productions of Old Clown Wanted, The Crazy Locomotive, Horses at the Window, And John Doe.   John Has worked with several Theatre Companies around the City and Suburbs of Chicago, and has worked in Film and Television projects in the city like Chicago Fire(NBC), and Boss(Starz).  He is a father of two, voiceover actor, as well as a percussionist/vocalist with the Chicago Rock Band The Statutes of Liberty.  John is represented by Gray Talent Group, and  also a very proud Member of Actors Equity Association. 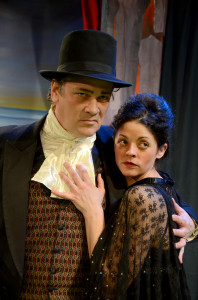