Me Too, I am Catherine Deneuve 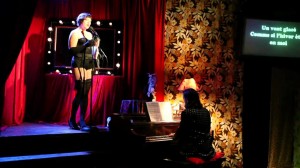 During this tour, Trap Door Theatre’s Artistic Director Beata Pilch, was honored with a three month working artistic residency in Paris made possible by the Program Cite Internationale des Arts. During her residency, Pilch networked with French actors, playwrights and directors to seek out and workshop a new production, of French origin and affiliation, to bring to Chicago.