(low cut daydream too near, too near)
Written by Ruth Margraff
Directed by Kate Hendrickson
The original work was inspired by the television show Fantasy Island.
Sept. 29 to Nov. 5
Read the community response to Fantasy Island for Dummies (artists and scholars share their thoughts on the production) 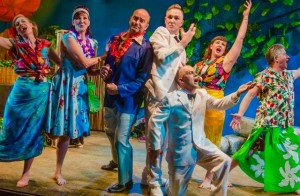 A new theatre work inspired by an episode of the iconic television series about the pleasures and perils of wish fulfillment. Devised in a collaborative exploration with Trap Door Theater actors, the piece is written by Ruth Margraff and directed by Kate Hendrickson, with original music composed by Pink Velvet. A  1980 “Fantasy Island” episode about a ventriloquist and her devious dummy inspires a voyage into suppressed identities, ancient Babylonian sex goddesses, and a”perfect wife” struggling with her defiant side. 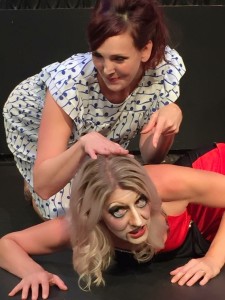 (…)this show is so brave, so bold and so nuts that no other theater company in our town would touch it with a ten foot pole. As Ricardo Montalban tells Annette Funicello in the original episode: “This is Fantasy Island. Things are possible here that can occur in no other place.” The same is true, once again, for Trap Door Theatre.

A fantastical show that is truly unique in the Chicago theatre scene! It’s so strange and that’s what makes it so fun and artful!

Fantasy Island for Dummies is more exciting, exploratory, and entertaining than most — so long as you’re willing to dive into the oddly fantastical.

Ruth Margraff (Playwright) Ruth Margraff has been called a leader in America’s avant-garde for her “audaciously original” (Moscow Times) use of language as poetic and vocal art to provide “layer after layer of richly textured emotion…and imminent danger” (Dallas Morning News). Best known in Chicago for her critically acclaimed ANGER/FLY with Trap Door and Kate Hendrickson in 2012; in NYC for writing six critically acclaimed martial arts operas with the late composer Fred Ho for the Apollo, Guggenheim Museum, Brooklyn Academy of Music and several national tours; for her Night Wind from Afghanistan for the play SEVEN, touring the world since 2008, introduced in 2010 by Hillary Clinton with Meryl Streep at the Broadway Hudson Theater; and for touring with her Café Antarsia Ensemble’s projects such as PREVIOUSLY BLUE (Dah Teatar, Serbia; 7Stages, Atlanta; Coe College/ Marquis Series, Dows Theatre, Iowa; Links Hall, Chicago Fringe Festival). She has received awards from Rockefeller, McKnight, Jerome, NEA, TCG, TMUNY, NYSCA, IAC, and Fulbright foundations. She’s a member of Theater Without Borders, LPTW and Red Tape Theater, a New Dramatist and Playwrights’ Center alumnae, a Chicago Dramatist playwright emeritus, and is Professor and Chair of the Writing Program at the School of the Art Institute of Chicago. www.ruthmargraff.com

Kate Hendrickson (Director) Kate Hendrickson is a resident director at Trap Door Theatre where her particular focus is on premiering new plays by radical American playwrights. She has developed and sustained long-term collaborative relationships with several playwrights, steering multiple world premiere productions to critical and popular success. Together with Margraff and the Trap Door ensemble, Hendrickson created ANGER/FLY which was recognized in the Chicago Reader “Best Of” edition as part of a Trap Door season presenting the “best string of theatrical stunners.” Other Trap Door credits include Cookie Play, Chaste and Beholder (Jeff Award for Best New Work, After Dark Award for Best Original Music), by Ken Prestininzi. Chaste received “Best of the Year” nods in the Chicago Tribune, Chicago Sun-Times, Chicago Stage Review, and the Huffington Post. Kate also directed Midwest premieres of Prestininzi’s AmeriKafka, Howard Zinn’s Emma (After Dark Award for Best Ensemble), and 12 Ophelias by Caridad Svich.