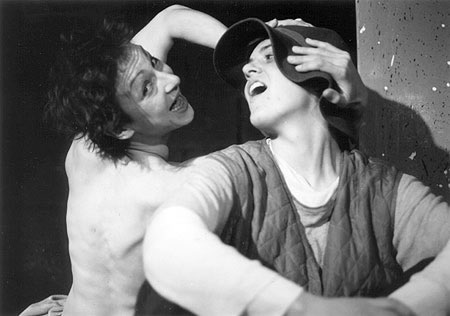 “Trap Door’s take is [as] weirdly unsettling as Brecht would have liked it.”
– Kate Zambreno, NewCity Review

In several pungent scenes, we follow Baal, the poet and star, as he destroys first his career, then one lover after another, then his reputation as a human, and finally himself. All in the name of “ Authentic Experience!”

Bertolt Brecht was born in Augsburg, a provincial Bavarian city in Germany, on February 10, 1898, and died in Berlin on August 14, 1956. Baal is his first published and performed play, completed by 1918, and reflects much of the physical surrounding and atmosphere of provincial Bavaria as well as confronting the artistically cosmopolitan Munich, to which the medical orderly, Brecht, went to study medicine after W.W.I.. He went on to Berlin and fame with The Threepenny Opera, a major influence on musicals internationally. With Hitler’s election, Brecht was forced to leave Germany and went into fourteen years of exile, primarily in Santa Monica, California as a screenwriter. After World War II, Brecht was called to testify before the House Un-American Activities Committee, after which he left for the East German capitol Berlin to found the Berliner Ensemble, noted in the 50s and 60s for performances all over.

Stefan Brun has been directing plays, working with performers and with playwrights for over 20 years. His work has been in Chicago, as one of the founders of the Prop Theatre and The National New Plays Network, as well as in Germany where he has been resident at theatres in Frankfurt, Main and Bonn. He studied at Columbia. Later at the Berliner Ensemble in Berlin and with Peter Stein and Robert Wilson at the Berliner Schaubuhne.