Morning in America grows dark as Homeland Security invades the heartland, in the hysterically dystopian world premiere of…

“Cookie Play sports shades of a twisted thriller, a black comedy and a surrealist poem. It is wrapped in enthralling suspense, engaged in an ideological debate and afloat in a sea of imagined sequences and metaphors, often in rapid succession. Prestininzi and Hendrickson play loosely with genre in a deliberate way, keeping the audience from ever getting comfortable with their own concept of what the play is or isn’t.”

“This dark comedy offers a potent metaphor for the cruelty we countenance in the name of homeland security.” – Zac Thompson, Chicago Reader

“The most brave and original show currently being performed in Chicago”
– Emilio Williams, playwright & director 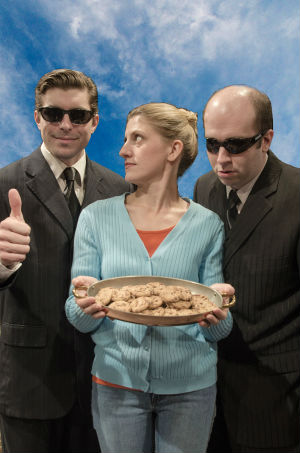 In Cookie Play, a mother from the heartland, fearing her son may be the next Edward Snowden, agrees to hold him captive in her basement to save both son and country. What happens next upends everyone’s moral equilibrium in this twisted, offbeat satire. The truth of black sites, whistle-blowing and sanctioned torture intrudes upon one family’s belief in a life as optimistic and sweet as a TV situation comedy or favorite bedtime story.

Director Kate Hendrickson and playwright Ken Prestininzi are longtime collaborators whose critically acclaimed productions at Trap Door Theatre have garnered several awards including a Jeff Award for “Best New Work”. They’ve sustained their collaborative relationship for over 20 years and, under the auspices of Trap Door, it is thriving. Hendrickson and Prestininzi spark each other to make precise leaps of imagination, while they interrogate and embrace what’s both dangerous and tender in human connections. Together they form a director/playwright team of shared reverie, theatrical vision, and the belief in the persuasion of intimacy and commitment.

Ken Prestininzi is an American playwright, director, and dramaturg. He is Associate Artistic Director of the Brown/Trinity Playwrights Repertory Theatre. His existential extravaganza play, AmeriKafka, was produced by Trap Door Theatre. He is also the author of the musicals Favorite of the King, Pe’er Flynt, and Ariadne as well as the plays The Burger Girl Jingle, The Hole, and Kept. Prestininzi began working with Hendrickson in the early 1990s when Hendrickson commissioned Prestininzi to write The Hole, a new play inspired by Dostoevsky’s Notes From Underground. They’ve sustained their collaborative relationship for over 15 years, and under the auspices of Trap Door Theatre, it is thriving. In their work, Hendrickson and Prestininzi spark each other to make precise leaps of imagination, intellect and emotion in order to invite and instigate palpable human connections with the theatrical choices they make. Together they form a director/playwright team of shared reverie, theatrical vision and the belief in the persuasion of intimacy and commitment.

Resident Director Kate Hendrikson specializes in premiering new plays by radical American playwrights, and has been a Trap Door company member since 2005. Kate is a Chicago native and a graduate of Bennington College. In addition to her work with Trap Door Kate has directed for Chicago Dramatists, Red Tape, Link’s Hall Physical Fest, Pivot Arts, and the International Voices Project. She is also a teaching artist with Urban Gateways.

This project was supported with a grant from the Elizabeth F. Cheney Foundation. 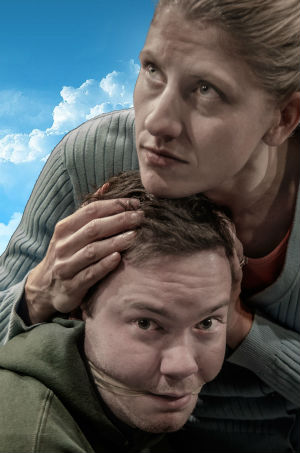