This production was recommended for a Joseph Jefferson Award. 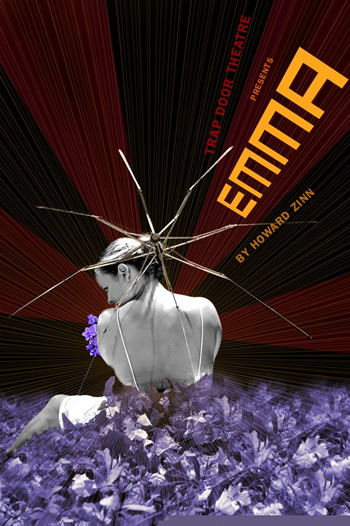 A fascinating look at the life of Emma Goldman, the anarchist, feminist, and free-spirited thinker who was exiled from the United States because of her outspoken views.

Howard Zinn was an American historian, playwright, and socialist. Zinn described himself as “something of an anarchist, something of a socialist”. He is most famous for his book A People’s History of the United States. He has written such plays as Emma and Marx in Soho.

Kate Hendrickson is a resident director at Trap Door and has developed and sustained long-term collaborative relationships with several playwrights, steering multiple world premiere productions to critical and popular success. Together with Ruth Margraff and the Trap Door ensemble, she created ANGER/FLY which was recognized in the Chicago Reader “Best Of” edition as part of a Trap Door season presenting the “best string of theatrical stunners.” Other Trap Door credits include Cookie Play and Chaste and Beholder (Jeff Award for “Best New Work”, After Dark Award for “Best Original Music”). Chaste received “Best of the Year” nods in the Chicago Tribune, Chicago Sun-Times, Chicago Stage Review, and the Huffington Post. Hendrickson also directed Midwest premieres of Prestininzi’s AmeriKafka, Howard Zinn’s Emma (After Dark Award for “Best Ensemble”), and 12 Ophelias by Caridad Svich.

In honor of the life, spirit and work of Emma Goldman, Trap Door Theatre donated all the proceeds from our October 26 performance of Emma to Chicago Area Planned Parenthood.