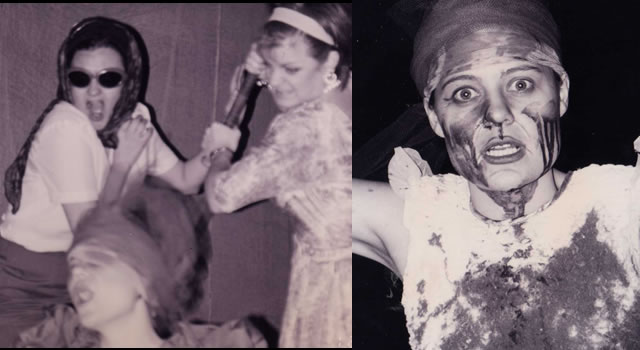 THE GNADIGES FRAULEIN
BY: Tennessee Williams
DIRECTED BY: Amantha Sam May

“An unusual choice, but director Amantha Sam May is loyal to the work in this Trap Door production, focusing on the physical humor…. Pilch and James can be wildly funny.”

The Gnädiges Fräulein is described as a “tragicomedy” and this one-act play is set in a Florida bunkhouse for “permanent transients”. The title may be translated as “The Gracious Lady”, but the “characters include a kooky society gossip columnist, the frowsy crone who runs the place, a demented former Viennese vaudevillian, a Cocaloony bird (evidently a local name for a pelican) and a tomahawk-brandishing, war-whooping, blond-wigged Indian.”

ABOUT THE PLAYWRIGHT:
Tennessee Williams in 1940 at the age of twenty-nine was able to see his play, Battle of Angels produced on Broadway. It was the first of a very long career of writing plays. Although the play was canceled after opening, Tennessee continued to rewrite it over the course of his life. Why did he stick so stubbornly to this play? Tennessee was quoted as saying, “Nothing is more precious to anybody than the emotional record of his youth and you will find the trail of my sleeve-worn heart in this completed play that I now call Orpheus Descending. About 75% of it is new writing, but what is more important, I believe that I have finally managed to say in it what I wanted to say, and I feel that it now has in it a sort of emotional bridge between my early years and my present state of existence as a playwright. So much for the past and present. The future is called “perhaps” which is the only possible thing is to call the future. And the important thing is not to allow that to scare you.”

Amantha Sam May after completing her BFA in Acting, she first appeared on the Chicago Trapdoor stage in 1994 as Blanche in Women Behind Bars, and went on to direct the company’s production of The Gnadiges Fraulein. Inspired by Beata Pilch’s stories of her own grad school days, Amantha attended California Institute of the Arts, earning her MFA in Directing in 1999. The following year, Amantha moved to NYC, where she worked as a director, professional belly dance performer and choreographer, and licensed massage therapist. Currently, Amantha is a professional writer, focusing on healthcare, health tech, and social impact. Since 2011, she’s lived in the Austin, TX area with her brilliant daughter and the sweetest, cuddliest pit bull in the world.