Kevin Cox was awarded with a Joseph Jefferson Citation for “Best Actor”. 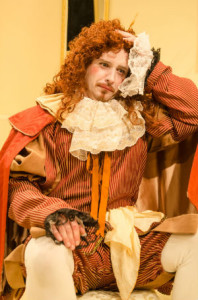 “Cox’s endearing and fearless performance cements my long-held opinion of him as one of the secret weapons of the storefront theater scene. 3 Stars!”

“It is a brilliant script treated brilliantly, which makes it one of the best currently running shows in town. Recommended!”

“Cox has become one of my favorite actors, and he’s brilliant here… Long before he reached the end, my eyes watered from a mixture of laughter and agony. Highly Recommended!” 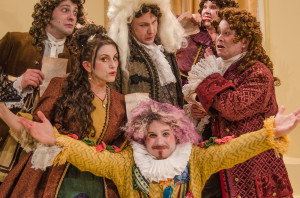 La Bête is a rollicking play, written in rhyming couplets, and inspired by the life of the French comic master, Molière. In the play, Elomire (an anagram for Molière) is the leader of an acting troupe, which according to their patron the Princess has gone stale and listless. She decrees that they must now hire a new company member, the bombastic, vulgar street performer Valere. A standoff between Elomire and Valere ensues and their lively debate is both funny and dramatic, hilarious and tragic.

David Hirson is an American playwright born into a show business family. He attended Yale and Oxford and his two well known-plays (La Bête and Wrong Mountain) deal with the issues surrounding the “creative process,” culture, and art vs. entertainment. La Bête, his first play, was produced on Broadway in 1991 where it infamously closed after only 25 shows despite the John Gassner Playwriting Award of the Outer Critics Circle for its author. The next year, it was produced at London’s West End garnering both critical and commercial success and winning the prestigious Laurence Olivier Award for Best New Comedy. The play got its second chance on Broadway in 2010 with great success, which was repeated at London’s West End. Hirson’s plays have received nominations for multiple Tony and Drama Desk Awards.
ABOUT THE DIRECTOR:
Kay Martinovich works as a freelance director based in Chicago. She directed Down Range by Jeffrey Skinner at Genesis Productions and A Skull in Connemara by Martin McDonagh at Northern Illinois University, where she is an Assistant Professor in Acting. She also directed Winsor McCay by Laura Marks (TEN Festival) at The Gift Theater and Anything of Value by Brett Neveu (RIPPED Festival) at American Blues. As Associate Artistic Director of Irish Repertory of Chicago (1999-2006), she directed the American premieres of Marina Carr’s By the Bog of Cats and Brian Friel’s The Yalta Game, among others. She is a proud member of The Society of Stage Directors and Choreographers (SDC).
Stage Manager: Allison Goetzman/ Set Designer: Carolyn Voss/ Lighting Designer: Richard Norwood/ Costume Designer: Rachel Sypniewski/ Sound Designer: Steve Labedz/ Movement: Kendra Holton/ Dramaturg: Milan Pribisic/ Graphic Designer: Michal Janicki