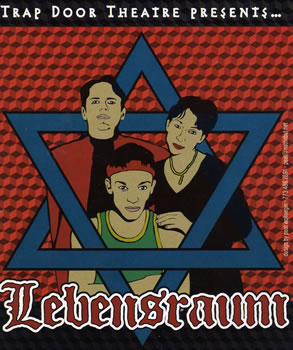 A modern look at the effects of the Holocaust on today’s youth.

Three actors play some 50 characters in this stunningly theatrical drama following a family that accepts Germany’s offer of work and citizenship to 6,000,000 Jews.

Germany Chancellor extends an invitation to six million Jews to come live and reestablish a Jewish Community in Germany, and help reduce as much as possible the immeasurable shame Germans feel each day for what they did to their Jewish neighbors.

Israel Horowitz is an author of more than fifty produced plays, of which several have been translated and performed in as many as thirty languages, worldwide. Horovitz has won numerous writing awards, including the OBIE, the EMMY, the Prix de Plaisir du Theatre, The Prix du Jury of the Cannes Film Festival, The Prix Italia, The Christopher Award, The Drama Desk Award, The Elliot Norton Prize, a Lifetime Achievement Award from B’Nai Brith, an honorary Doctorate in Humane Letters from Salem (Massachusetts) State College, and many others. Horovitz was a founder and artistic director of Gloucester Stage Company, and of The New York Playwrights lab. Among Horovitz’s best-known plays are The Indian Wants The Bronx, Line, Rats, It’s Called The Sugar Plum, Morning, The Primary English Class, The Wakefield Plays, The Chopin Playoffs, and the Growing Up Jewish trilogy. Horovitz was visiting France, frequently, where he often directed French-language productions of his plays. He is the most-produced American playwright in French theatre history. Horovitz died on November 9, 2020 from cancer in Manhattan.