Adapted and Directed by: Catherine Sullivan

presented with support from the Elizabeth F. Cheney Foundation

The Locketeer is an adaptation of Elias Canetti’s play from 1956, The Numbered, wherein a nameless future state claims its power by imposing life spans on its citizens. This competition for status causes social paranoia and a tragicomic refusal of facts. The adaptation was devised with the ensemble. 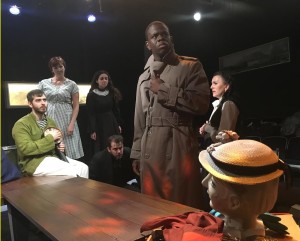 This physicality and expressiveness of this cast of ten under the superb direction of Catherine Sullivan IS what gives THE LOCKETEER its considerable draw. – Amy Munice, Picture this Post

…the endlessly inventive Trap Door has the advantage of being experienced producing the works of central/eastern European makers from the past century… Sullivan’s method of demonstrating the consequences of this is ingenious. – Jacob Davis, Around the Town 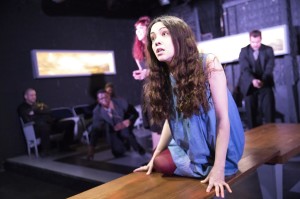 Elias Canetti (Playwright) was born in 1905 in Bulgaria, grew up in Vienna, Austria in the 1920s, and escaped to England at the beginning of WW2 in 1939. He died in Switzerland in 1994.  Canetti wrote all his literary works (novel, essays, plays, travel journals, social studies and the three tomes of autobiography) in German.   As Sephardic Jew he experienced anti-semitism first had which inspired his famous study on mass psychology, Crowds and Power (1960).  His first and only novel Auto-Da-Fé (1935) is about totalitarian thinking and the psychopathology of power.  His plays, The Wedding (1932), Comedy of Vanity (1933/34) and Life-Terms (1964), are the least know part of his literary oeuvre.  They are satires developed around one central idea/theme without plot or any conventional, linear development.  They are founded on “acoustic masks,” the Canetti’s term for a character’s language reservoir, as language is both the main element of dramatic structure and a “great traitor” of human character.  Canetti won the Nobel Prize for Literature in 1981.

THE LOCKETEER from Catherine Sullivan on Vimeo.