Caryl Churchill was born in 1938 in London and has written for the stage, television, and radio. Downstairs, her first play, was written while she was still at Lady Margaret Hall, Oxford, and was first staged in 1958, winning an award at the Sunday Times National Union of Students Drama Festival. She wrote a number of plays for BBC radio including The Ants (1962), Lovesick (1967) and Abortive (1971). She was Resident Dramatist at the Royal Court Theatre in London (1974-5) and spent much of the 1970s and 1980s working with the theatre groups ‘Joint Stock’ and ‘Monstrous Regiment’. Her most famous plays include Cloud Nine (1979), Fen (1983), Top Girls (1982), and Serious Money (1987), which won the Evening Standard Award for “Best Comedy of the Year” and the Laurence Olivier/BBC Award for “Best New Play”. More recent plays include Mad Forest (1990), and The Skriker (1994). Caryl Churchill lives in London. Her latest play Escaped Alone (2015), premiered at the Royal Court Theatre in January 2016.

Through a kaleidoscopic lens of over 100 characters in fifty-seven different scenes, Churchill’s exhilarating play Love and Information explores how our incessant consumption of information and virtual connectivity penetrates and frames our sense of ourselves and our relationships with others.

…Love and Information is a treasure… – an absolutely enthralling experience directed by Kim McKean.

…how the over-saturation of media has enhanced and weakened modern day relationships between humans… with an interesting twist.

Trap Door knows how to package tickles into every second of a performance and in every inch of the stage. HIGHLY RECOMMENDED! 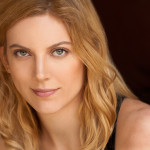 Kim McKean is a director and actor for both the stage and screen, and is thrilled to return to Trap Door Theatre after a more than ten-year hiatus. She currently serves as an Assistant Professor of Theatre at the University of Texas at El Paso. As an actor, Kim has appeared on HBO, ABC, CMT and Spike TV, several independent films, commercials, and numerous stage productions across the US and Europe. Favorite Trap Door credits include: Garden of Delights, People Annihilation (“Best Production”, After Dark Award), The Fourth Sister, The Bitter Tears of Petra Von Kant (“Best Ensemble”, After Dark Award), The Crazy Locomotive (European Tour) and The Swan. Her film, The Arrangements—which she directed and produced—was an official selection for the Borderscene Film Festival, El Paso Film Festival and Plaza Classic Film Festival Local Flavor series. She has received multiple awards for her work including: “Outstanding Director of a Play”, “Excellence in Directing”, and “Outstanding Production of a Play” for her production of Lydia by Octavio Solis, and “Best Actress” from the New York International Film Festival and Midtown International Theatre Festival in New York City. She received a BA in Theatre from the University of Wisconsin and an MFA from the University of California. She is a member of SAG-AFTRA and Actors Equity Association.