A Couple of Poor, Polish-Speaking Romanians 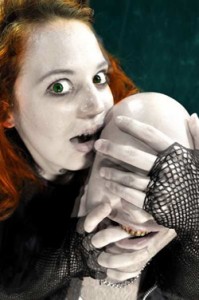 Dorota Maslowska is a Polish writer and journalist. At 19, she wrote the internationally acclaimed, award-winning novel, Wojna polsko-ruska pod flaga bialo-czerwona (translated to English as either White and Red or Snow White and Russian Red) a depiction of unbalanced, sexually aggressive, amphetamine-scarred youth both feted for its originality and condemned for its brutal vulgarity. A notable example of post-modernist literature, her book became a best-seller in Poland and was almost immediately translated into several languages, including French, German, Spanish, Italian, Dutch, Russian, English, Hungarian and Czech. Her second novel is Paw królowej (The Queen’s Peacock). Currently, Dorota Maslowska lives in Cracow, collaborating with a number of magazines, most notably the Przekrój and Wysokie Obczasy weeklies, as well as Lampa monthly and the quarterly BEAT magazine. At 24 she wrote her first play; A Couple of Poor, Polish-Speaking Romanians. The play ran for 2 years in Warsaw, before being produced by the Soho Theatre in London; this is its U.S. premiere.