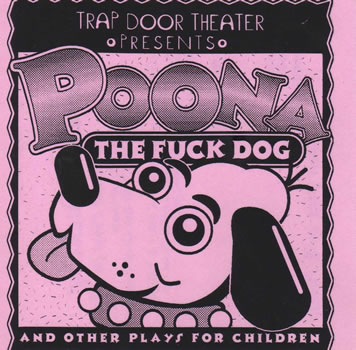 POONA THE FUCK DOG, and other Plays for Children
BY: Jeff Goode
DIRECTED BY: Cheryl Snodgrass

“One of the best productions in Trap Door’s history”
– Chris Jones, The Chicago Tribune

A darkly wacky adventure through Poona’s Fairy tale world where: Tvs are King, Frogs don’t turn into Princes, Princes carry bombs and it’s all ok with God. (Oh! Plus one Dragon!)

Jeff Goode is an American director, actor and playwright. He is the co-founder of No Shame Theatre, and a founding company member of The Unusual Cabaret. Jeff has directed The Maids at Trap Door Theatre. He has written such plays as The Eight, Narcissus & Echo, Lesbian’s Last Pizza, and The UBU Plays.

Cheryl Snodgrass holds an undergraduate degree from the University of Iowa and a Masters in Fine Arts. Cheryl has had the honor to direct Jeff Goode’s acclaimed The Eight: Reindeer Monologues, more times than anyone else in the world. Cheryl is a founding member of No Shame Theatre (Iowa City), The Unusual Cabaret (Bar Harbor, Maine) and Les Enfans du Mais & C’est Destine (Chicago, IL). Cheryl has performed in, produced, and/or directed a number of Jeff Goode shows including: Lesbian’s Last Pizza, Narcissus & Echo, Escape from Eldarado and Larry and the Werewolf.