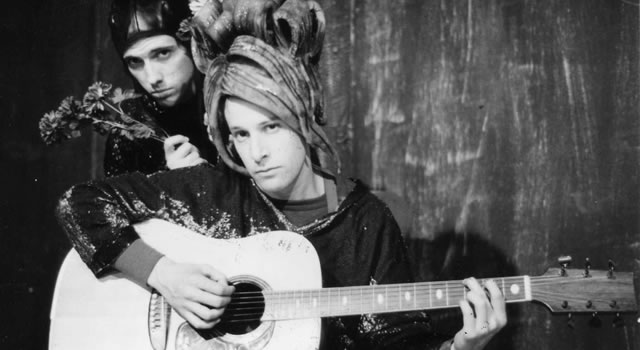 SOME THINGS YOU NEED TO KNOW BEFORE THE WORLD ENDS (A FINAL EVENING WITH THE ILLUMINATI)
BY: Larry Larson and Levi Lee
DIRECTED BY: Michael S. Pieper

“Performed by people who know what they’re doing.”
– Jack Helbig, The Chicago Reader

“A novel script, a talented couple of actors, a smart director and an imaginative production. Hallelujah.”
– Richard Christiansen, The Chicago Tribune

The play follows an evening church service with the Reverend Eddie, a protestant minister, and his assistant, Brother Lawrence, in a dilapidated church. The audience functions as Eddie’s congregation. The script draws from conspiracy theories, vaudeville humor, and pop culture references.

Larry Larson and Eddie Levi Lee have been collaborating playwrights for over thirty years, ever since they met as actors in the company of The Academy Theatre, in Atlanta. They have had numerous productions of their work in New York, Philadelphia, Chicago, Los Angeles, Dallas, Kansas City, Seattle, and abroad in Dublin and Capetown garnering several awards.