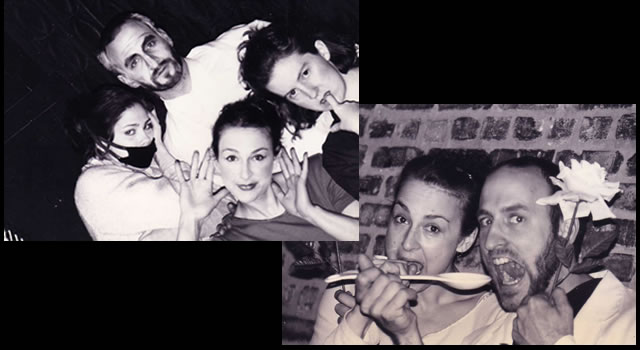 “Now in its U.S. premiere by Trap Door Theatre, “Tattoo” is a family show only in the grimmest sense. It shows little but implies years of waking nightmares.”
– Lawrence Bommer, Chicago Tribune

“In all, Tattoo is a wrenching piece, made all the more so by a director and a cast that are up to the demands of Loher’s horrific story”
– Catey Sullivan, Nightlines

German dramatist Dea Loher wrote Tattoo, her 1993 Goethe Award winner, in free verse, without punctuation or stage directions. But despite this free-form script, Loher’s uncompromising play resists experiment. Given its relentless plot and sardonic tone, the hourlong ordeal has room for little but an almost misanthropic misery. Tatoo presents a family incurably poisoned by its father. In Loher’s meticulous example of domestic terrorism, an incestuous baker literally muzzles his hapless wife and reduces his daughters to sex tools.

Dea Loher is a German playwright and creative writer and has been awarded major prizes for drama and literature in Germany, including the Joseph-Breitbach-Preis. She has written such plays as Olga’s Room, Innocence, and Land Without Words. Dea studied German Language and Literature and Philosophy in Munich until 1988. In 1990 she studied Scenic Writing with Heiner Müller and Yaak Karsunke at the Academy of the Arts Berlin. Her first play Olgas Raum (tr.: Olga’s room) had its premiere at the Ernst Deutsch Theatre in Hamburg in 1992 and she soon became one of the most-performed and most productive young playwrights of her generation. She pursues the stylistic principle of »the multiplication of the discourse as an answer to the question about political theatre« (Theater heute). Her plays are always set in modern society and reveal the fundamental human experience. Dea Loher’s dramatic oeuvre has been awarded numerous prizes, including the Else Lasker Schüler Award, the Mülheim Drama Award and the Bertolt Brecht Prize.