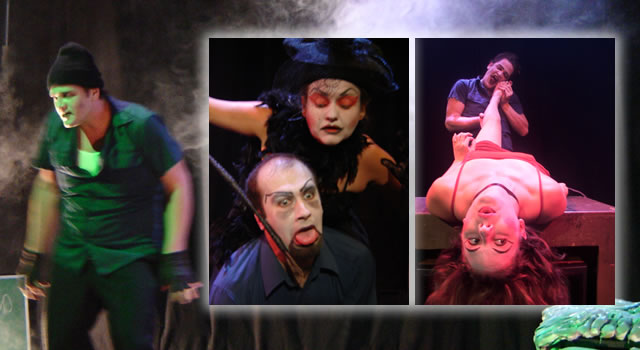 Written by Stanislaw I. Witkiewicz

When a small band of outcasts and super villains hijack a locomotive engine, they determine to race it full-throttle into an oncoming passenger train in order to experience the very Mystery of Existence, but will their high-speed adventure send them headlong into another dimension, or are they only heading for disaster?

Written in 1923, this avant-garde gem serves as Witkiewicz’s indictment against futurism, the cinema, and the worship of the machine.

Equal parts paradox and parody, metaphysics and mayhem, THE CRAZY LOCOMOTIVE takes audiences on a dream-like journey into madness.

Stanisław I. Witkiewicz is one of the most brilliant figures of the European avant-garde. He was a poet, painter, playwright, an expert on drugs, an early spokesman for a radically non-realistic theatre and an original philosopher and social critic of mass culture, post-industrial society, and the rise of totalitarianism. He was also a pioneer in serious experimentation with narcotics and prophetically recognized the growing importance that they would have on Western civilization. Politics, revolution, and even art were similar “drugs.” Witkiewicz committed suicide in September of 1939, days after Poland was invaded by both: Nazi Germany and Communist Russia. He is best known for his plays The Madman and the Nun, The Mother, The Water Hen, The Anonymous Work, and The Shoemakers.

Andrew Krukowski was born in Poland. From 1980-1984 he attended the Film School in Lódź, with alumni that included Roman Polański and Krzysztof Kieślowski. After graduation, he worked in theaters throughout Poland, Germany and the Untied States. His first directorial debut was in 1985, Schaeffer’s Audience: 3.