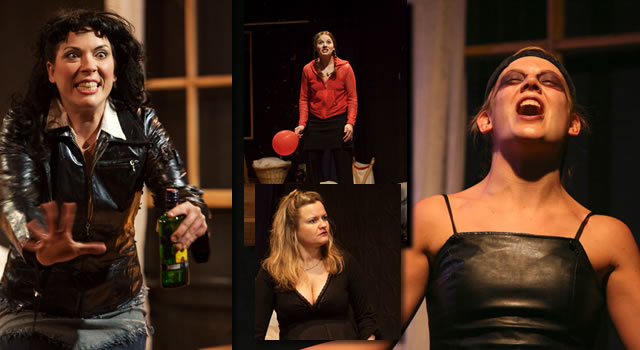 “This production skillfully switches from moments of hilarity to instances of existential dread in a manner that is almost, well, Chekhovian.”
– Kerry Reid, Chicago Tribune

Chicago Tribune names The Fourth Sister as one of the “Top 5 Shows of 2006”.

When an American filmmaker comes to town, they see a chance to change their fates, and someday, just maybe get to Hollywood – or is it Brighton Beach?

An unflinchingly funny and daring epic, with a sly wink towards Chekhov.

Janusz Głowacki is the author of 8 plays, 10 books, 6 screenplays and 10 radio plays. Four of his movie scripts were produced in Poland, one directed by Oscar winning Andrzej Wajda. In 1999 his screenplay, Hairdo, won the Tony Cox Screenwriting Award in the Nantucket Film Festival Screenplay Competition. Głowacki’s play, The Fourth Sister, had its world premiere in January of 2000, in Warsaw, Poland. It was produced in several theatres in Poland, Germany, and Slovenia and it won the grand prize in the 2001 International Theatre Festival in Dubrovnik. Głowacki was awarded the Jurzykowski Foundation Award (1995), the National Endowment for the Arts Playwright Fellowship, the Guggenheim Fellowship for 1988 and Drama League of New York Playwrighting Award (1987). In 1985 he received a New York State Council on Arts grant to write the play Hunting Cockroaches. In 1991 he was a Master Artist at the Atlantic Center for Arts. In 1989 he was playwright in residence at the Mark Taper Forum, and in 1984 in the New York Shakespeare Festival. He was a member of the American PEN and the Writers Guild of America East. A number of his essays have appeared in the Arts and Leisure section of The New York Times, The New York Times Sunday Magazine and on the NYT OP-ED page. Other plays include Cinders, Fortinbras Gets Drunk, Hunting Cockroaches, and Antigone in New York.