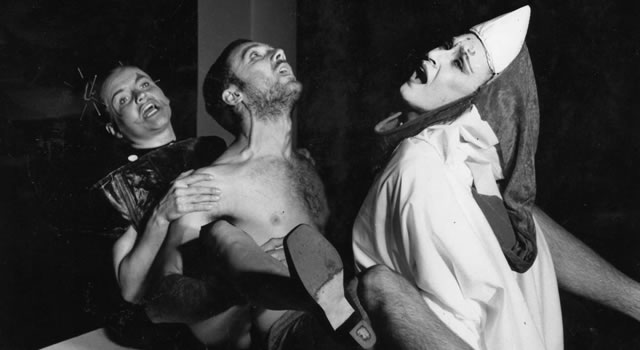 THE MADMAN AND THE NUN
Written by Stanislaw I. Witkiewicz

Translated by Daniel C. Gerould
Directed by The Ensemble

For hardy and adventurous souls, this is a most interesting hour of theatre. Set in a cell for raving maniacs in a lunatic asylum, “The Madman and the Nun” plays with the dehumanizing aspects of institutional life and the subjectivity of what constitutes sanity … Keep your eye on the people at Trap Door, this is a strong beginning. – Chris Jones, New City

It’s encouraging to see a new company grappling with a playwright this important and overlooked… – Justin Hayford, The Chicago Reader

Stanislaw I. Witkiewicz: One of the most brilliant figures of European avant-garde, poet, painter, playwright, and an expert on drugs, Witkiewicz was an original philosopher and social critic of mass culture, post industrial society, and the rise of totalitarianism, as well as an early spokesman for a radically non-realistic theatre. He was also a pioneer in serious experimentation with narcotics. Witkiewicz first used drugs in Russia immediately before the revolution and prophetically recognized the growing importance which they would have in Western civilization. He saw the cult of narcotics as part of a desperate attempt to find meaning in a world that has lost all its color and strangeness and was growing more and more mechanized and inhuman. Politics, revolution, and even art were for Witkacy similar “drugs” offering modern man only temporary escape from the horror of existence. He killed himself shortly after the outbreak of war in September, 1939. Witkiewicz is known for other works such as: The Mother, The Shoemakers, The Crazy Locomotive, The Metaphysics of a Two-Headed Calf, The Cuttlefish, The Water Hen, and The Anonymous Work.