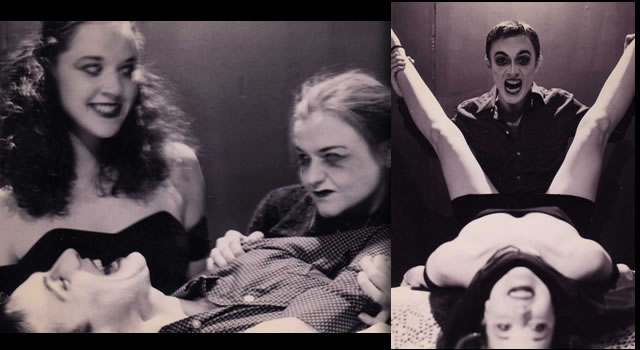 THE MOTHER
Written by Stanislaw I. Witkiewicz

With “The Mother”, Trap Door has reached a new level of stylistic maturity, conquering one of the modern era’s most difficult plays without reducing its complexity, ugliness, or tedium. This is an especially impressive feat considering the paucity of resources the Trap Door folks have at their disposal.”
– Justin Hayford, Chicago Reader

The Mother is a portrayal of a sick bourgeois world whose most shameful and hidden secrets are mercilessly exposed. The close relationship between mother and son, the dead father who haunts the family from beyond the grave, the revelation of the shameful truth about the father, and the discovery of the hidden kinship between father and son. The whole society is a society of bloodsuckers, who cannot even find sustenance by drinking others’ blood.

Stanisław I. Witkiewicz was a Polish poet, painter, playwright, novelist, photographer, expert on drugs, and philosopher. He is one of the most brilliant figures of the European avant-garde. A consummate artist who incessantly crossed disciplinary boundaries, he experimented widely in photography, painting and drawing, theatre, philosophy, and fiction between WWI and WWII. Among his most well-known works are the transgressive novel Insatiability, his 1933 work Narkotyka comprised of surrealistic portraits and drawings created and written under the influence of a wide array of narcotics (work which predated similar experiments by Michaux among others), his fractured photographic self-portraits using mirrors and his plays The Madman and the Nun, The Water Hen, The Mother, The Anonymous Work, and The Shoemakers. Witkiewicz committed suicide shortly after the outbreak of war in September of 1939.

Sean Marlow was the co-founder of the Trap Door Theatre. Originally from Atlanta, GA, he received his Bachelor of Fine Arts in acting from U.S. International University in San Diego, CA. and continued with his graduate studies at the University of Missouri-Kansas City. In the early years of Trap Door, he has acted, directed and designed over a dozen shows.