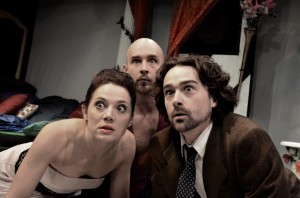 A humorous commentary of a marginalized man taunted with the life he could be living. What happens when a man visits friends for the grand reveal of their new décor and discovers that their next project is him?

“As is standard with the Trap Door, the cast is wholly excellent.”
Recommended! – Paul Kubicki,  Stage and Cinema

Václav Havel (playwright) was a Czech playwright, essayist, poet, dissident and politician. Because of his family’s links to the cultural and political events in Czechoslovakia from the 1920s to the 1940s, the communists did not allow Havel to study formally. In the first part of the 1950s, Havel entered into a four-year apprenticeship as a chemical laboratory assistant and simultaneously took evening classes to complete his secondary education (which he did in 1954). For political reasons he was not accepted into any post-secondary school with a humanities program; therefore, he opted to study at the Faculty of Economics of Czech Technical University. He left this program after two years. Following his return from two years of military service, he worked as a stage technician – first at Divadlo ABC, and then, in 1960, at Divadlo Na zabradli. From 1962 until 1966, he studied Drama by correspondence at the Faculty of Theatre of the Academy of Musical Arts. Havel was the ninth and last president of Czechoslovakia (1989-1992) and the first president of the Czech Republic (1993-2003). He wrote more than 20 plays and numerous non-fiction works. Havel received much recognition before his death in 2011, including the United States Presidential Medal of Freedom, the Gandhi Peace Price, the Philadelphia Liberty Medal and the Ambassador of Conscience Award. Dozens of Cousins was written in 2010 as a modern sequel to The Unveiling. This is its first production in an English translation by Jan Novak.