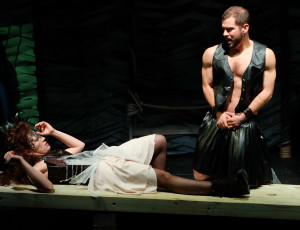 Trap Door Theatre presents an adaptation of Jean Racine’s Phèdre. Physical evocations of the myths of ancient Greece, as well a critical eye towards societal conventions combine to create a modern take on this classic story of forbidden love.

Norma Desmond is alive and definitely unwell. She’s just going by the name ‘Phèdre’ and her address is Cortland Avenue, not Sunset Boulevard 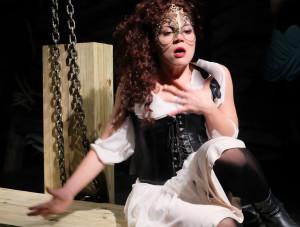 Trap Door’s (…) company has been mounting intractable, inscrutable plays for 22 years, is the site of perhaps the greatest Chicago theater success in the last quarter century.I know, I know, such superlatives are supposed to be reserved for companies like the Goodman or Steppenwolf, (…)but in our pathologically mercantile culture, we too easily confuse a cultural institution’s accumulation of assets (…) with its importance.

Wiesner’s eye for the inexplicably resonant is characteristically sharp

Tiffany Bedwell’s performance as Phèdre is arresting would be understatement: it’s hard to imagine a more invested and varied embodiment of one overwhelmed by forbidden and unrequited lust.

Halie Ecker’s Venus is an exceptional portrayal of a Goddess, typically represented as languid and voluptuous: here, her sinister wiles bring out the insidiousness of lust and fit perfectly in the production that allows for no redemption. 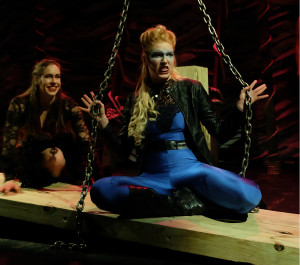 Jean Racine (Playwright) was a French poet and playwright born in 1639. From age nine he was reared in a Jansenist convent and chose drama as a career in defiance of his upbringing. His fame rests on his neoclassical tragedies: Britannicus (1670), Bérénice (1671), Bajazet (1672) and Phèdre (1677) [known as Phaedra in English]. Through some odes and sonnets written to Louis XIV, he attracted the attention and interest of the King. In Paris he met Moliere, the great comic playwright and actor-manager, who staged in 1664 Racine’s first tragedy with mediocre success. His first great success came with Andromaque (first performed in 1667) which established Racine’s most appreciated theme, that of the tragic folly and blindness of most passionate, uncontrollable love. Phaedra, the most profound and poetic of his tragedies, uses Euripides as a source and inspiration. In 1672 Racine became the member of the French Academy and two years later obtained the office of treasurer of France, the position conferring nobility. Eight months after the premiere of Phaedra, Racine cut all links with the commercial stage, married a pious young woman and accepted with Nicholas Boileau, the high honor of writing the official history of the regime of Louis XIV. During the next twenty years, he wrote only two plays notable for the presence of choral interludes on the ancient Greek model. He died in 1699 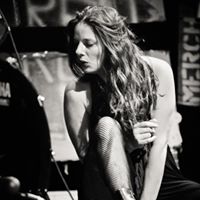