Laura Ruohonen creates her own special world in her plays, whether depicting a seventeenth-century court or a modern apartment block. Ruohonen’s texts are both poetic and down-to-earth, combining humour and tragedy into an organic whole. In her plays, people are inextricably bound to their environment, and an individual’s inner and outer life reflect one another, sometimes getting blended in the process. Ruohonen writes on many levels, and her works can be interpreted in many different ways. At the heart of her works lies a strong ethical core. From 2008 to 2013 Laura Ruohonen was the Professor in Drama of the Theatre Academy Helsinki. 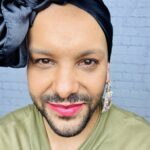 Runs: 8 p.m. Thursdays, Fridays and Saturdays. No show on Thanksgiving day, with an added show at 7 p.m. on Sunday, November 28th.

Admission: $20 on Thursdays and Fridays, $25 on Saturdays, with two for one admission on Thursdays.

Where: Trap Door Theatre is located at 1655 W. Cortland St.

Queen C explores the story of Queen Christina of Sweden, as she fights the uphill battle of ruling as a Queen in a world created for Kings. Friendship, Marriage, Legacy, Philosophy, Gender Roles… How much will Christina cast away to live the life she desires?

Queen C has been translated into more than seven languages, won several prizes and been staged in five continents in cutting-edge theaters. After receiving accolades abroad, the play was then staged in Finland. Laura Ruohonen is a playwright in residence at the Finnish National theatre, with a new play and a poetry book coming up in 2022.

MASKS REQUIRED AND PROOF OF VACCINATION FOR INDOOR PERFORMANCES

Director Michael Mejia has made Trap Door’s compact stage into a visual feast.

…the queen’s desire not to be defined by others—whether by gender, sexual preference, or in any other way—rings true and is of the moment…

On this stage, people are rarely alone and it is impossible to be too far apart, yet Christina’s alienation is clear.